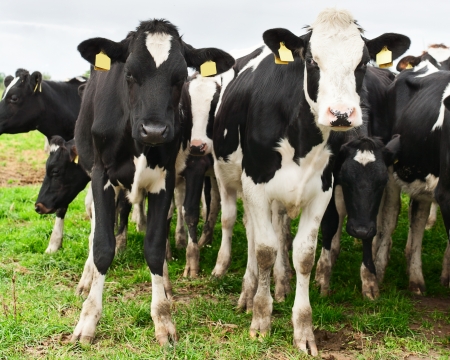 Much has changed in bovine genetics in the last 20 years?

One extraordinary issue has arisen for livestock farmers, which isn’t a change in the genetics industry but adds to farmers list of hurdles to overcome alongside weather, market prices and legislation are Vegan activists.

These are people who not only slander the industry with propaganda videos, twisting the truth or down right lying to suit their ends.

Even worse than that they now feel they have the right to turn up on farms, interfering with livestock, leaving gates open and even in the worst cases, causing harm to livestock and stating it’s down to the farmers. A farm in Lincolnshire had 200 vegan activists turn up 100 on-farm and 100 outside and two livestock fatalities from their actions.

So, I think we can all agree that this is an unprecedented new battle in the already fraught world of farming, not to mention Brexit uncertainty and a new direction in UK farming legislation. That as yet is unclear!

Back to the actual bovine genetics industry though and on finding an article published in the Independent in 1996 called – Bull’s semen: Things you didn’t know, I wanted to assess how much bovine genetics has changed in 23 years if at all.

Number 1. of the things you didn’t know about bull semen discusses that 75% of dairy cattle breeding is carried out by artificial insemination, largely due to the aggressive temperament of dairy bulls. Artificial insemination also has the benefit of being quicker, simpler, more efficient and less dangerous.

There is also an example of a 98% success rate in an American herd of 2,000 cows with an AI expert. It quotes that in 1996 that most beef cattle were bred naturally although a shift had started towards some use of artificial insemination.

Well, one progressive change that is great to see is beef farmers use of artificial insemination is increasing, although by no means matching it’s prevalence in dairy farming.

Duncan Hazard Export Director of Scawfell Genetics and partner in RM Hazard and sons Limousin herd in Grantham said “We have been using artificial insemination over the last 10 – 15 years due to realising the quality of bulls available for artificial insemination. We have been able to exponentially improve calving ease, growth rate and potentially improve fertility, this has led to an increase in output.”

A new important development at least for Limousin breeders but hopefully other beef breeds will follow suit. EBV (estimated breeding values) data from 5m Limousin cattle have been added to the UK evaluations with performance records now available on the Limousin Taurus System.

“Semen is sold through advertisements in the farming press and by travelling sales reps. (One of their chat-up lines: “Some men can’t give their semen away; people pay me for mine.”)”

The above to be fair is still true but farmers have not only found the internet nowadays and are not only active users but avid social media users. Especially Facebook, Twitter and Instagram! I bet you would have put money on 22 years ago that “farmers would never be on any of that social media nonsense!”

“As with some spirits, price depends on the “proof” of the product, though in this case proof means the proven ability of the bull to sire cows with high milk yields.”

The price of bovine semen straws from bulls with daughters with a high milk yield fetch the top prices and are sold globally the same now as they were in 1996!

“Besides proof, another influence on semen price is availability. Bulls, which have three-foot penises, vary widely in the frequency with which they produce and in the quantity of semen that results. A single ejaculation can yield as many as 500 straws, or as few as 50.”

Well, the above varies widely on the ability of the expert collecting the semen, method used, affinity with the bulls, instinct and patience and most importantly good stockmanship!

Typically, 20 years ago and still rife now is the use of electroejaculation but for the highest quality sample with the highest fertility natural collection has proven to be superior and the method used by Scawfell Genetics.

Scawfell Genetics is also fortunate thanks to Pete’s skill, experience and affinity with bulls to be achieving an average yield of 700 straws on stud semen collection and from on-farm collection.

“You may be wondering how it is collected.” The methods quoted vary but include:

Mounting other males, referred to as “teasers”, then intervened by a rubber tube.

Mounting and inseminate cows with the semen extracted from the cow afterwards.

Finally, a reference to being excited artificially, using an aerosol spray replicating the smell of a cow on heat.

Well, I must apologise for not being able to find an updated figure on the current worth of the British bovine genetics industry, I have spent a considerable time searching but to no avail! If anyone has information on this please respond in the comments.

The only data I could find was on the global  market – “The animal genetic market is projected to reach USD 5.8 billion by 2023 from USD 4.2 billion in 2018, at a CAGR of 6.5 % during the forecast period.” information provided by markets and markets. Who apparently have the information on the UK bovine genetics market but wanted £5000 for the data.

The use of genetic data and artificial insemination has without a doubt grown extensively in 20 years and although still largely dairy there is a growing uptake in the beef market.

Another phenomenal change in the market that is a huge progression in farming, although some people have an image of farmers as being technophobes, this is far from true. The biggest adoption by farmers is the smartphone as it gives internet access on-farm where there’s infrequently WIFI connection.

This offers farm management software on-farm, farm monitoring notifications straight to your phone and a whole host of other breakthroughs!

Farmers, or at least livestock farmers through lambing, calving etc. can spend a lot of time waiting on the farm to check everything goes smoothly and in case there animals need help lambing or calving. With of course a smartphone and not much else to kill the time when the chores are done!

Hence the popularity with farmers and social media!

The big change available to farmers and accessible on their smartphones is SellMyLivestock a digital marketplace for farmers. Offering the ability to buy and sell livestock online without travelling to marts, the risk of bad prices on the day, or biosecurity risks!

Now they have extended their digital marketplace to include SellMyGenetics which is to be launched imminently. This offers dairy, beef breeders and genetics companies the opportunity to buy and sell genetics and embryos online.

Scawfell Genetics Ltd are pleased to be involved with SellMyLivestock and will collect, process, store and distribute semen on behalf of some of the third party clients and semen companies using the platform.